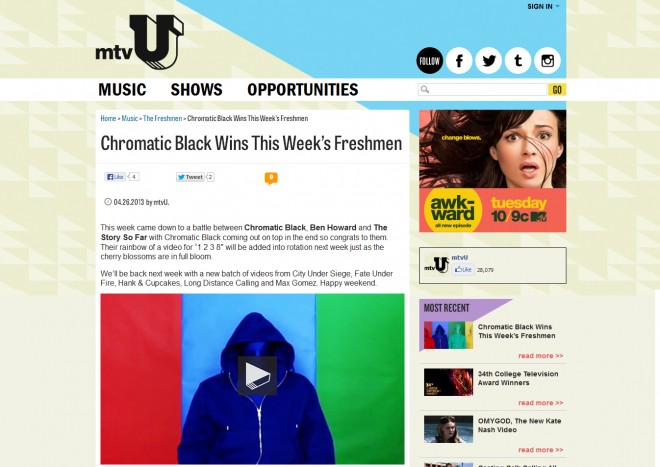 This week’s winner for the MTVu Freshman Video Contest is chromatic BLaCK, an avant-garde punk influenced band from Germany. The winners were announced Friday April 26th. The band won for their very colorful and creative music video for “1, 2, 3, 8,” which is their latest single out now on OK! Good Records (http://okgoodrecords.com). As winners of the contest, the band will enjoy 8 weeks of regular rotation on the MTVu TV channel.

chromatic BLaCK’s video beat out 4 other tough competitors for the honor, which included Ben Howard, The Story So Far, Jamaican Queens  and Papermaps.

About OK!Good Records: OK!Good Records is an independent record label based in the New York City area. Founded in 2011 as an outlet for unconventional, evocative, and genre-defying music, OK!Good’s mission is to pluck talented artists from all corners of the global landscape and present them to the American public. Visit http://okgoodrecords.com for more information.