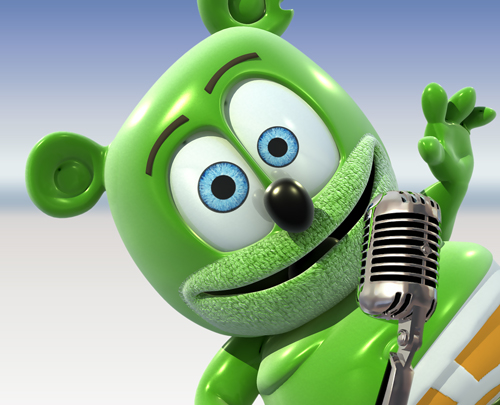 This week Gummybear International, owners of the Gummibär brand and one of YouTube’s top revenue partners, premiered a brand new Gummibär video on their YouTube channel. The video features Gummibär, dancing and singing along to his own “Happy Birthday” song which appears on his “La La Love To Dance” CD.

In the video Gummibär prepares for a birthday party by decorating with his own line of party supplies, which include balloons, plates, cups, hats and napkins. The party supplies in the video are for sale on Gummibär’s new online shop located at http://gummybearshop.com.

Gummibär’s album, “La La Love To Dance” is also for sale in CD format on the Gummybearshop.com, while digital downloads are available on his official website, http://gummibar.net and major online music retailers such as iTunes and Amazon.

The first Gummibär video hit the Internet in 2006 and since then the character has grown to be immensely popular around the world. The official YouTube channel for Gummibär ranks as the 27th most viewed musician channel of all time and is the 67th most viewed overall channel of all time. To date, there have been more than 1.5 billion documented views of Gummibär videos on the site and the character continues to average 2 million views per day.

The success of Gummibär also extends outside of YouTube. The character’s songs have been released in over 40 different countries and in over 27 different languages. Gummibär has received Sales Certification Awards in over 8 countries, including selling 96 times Platinum on Universal Records in Greece with his premiere album “I Am Your Gummybear,” despite the country’s adverse economic conditions. The musical success of Gummibär has also led to extensive merchandising lines throughout the world, including a custom line for the Kitson boutique in Japan.

Gummybear International is engaged in the creation, development, and branding of animated entertainment properties, as well as musical content based on and produced for such properties. It markets and sells recorded musical and video products in various physical formats, such as compact discs and DVDs, and digital formats, such as downloads and ringtones, through a worldwide network of established distributors and licensees. The company’s music publishing segment owns and acquires rights to musical compositions, markets these compositions, and receives royalties or fees for their use. It also is actively developing mobile and computer based games and exploiting merchandising rights for its brands in cooperation with a variety of licensing partners. GBI is working on a number of film and TV projects. The company is headquartered in New Jersey.