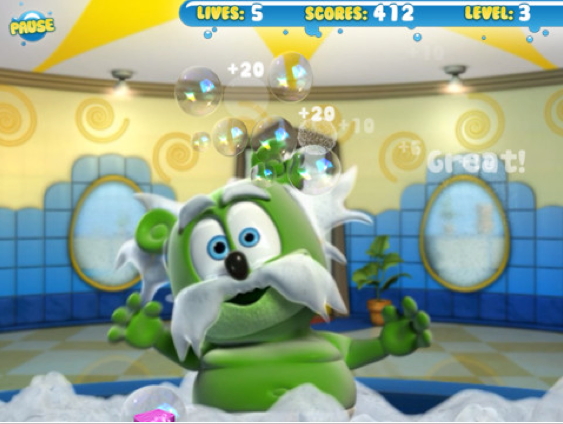 Gummybear International, owners of the Gummibär brand and the animated singing and dancing gummy bear character, are proud to unveil their latest iOS app, The Gummibär Bubble Up Game. The App is designed for Apple’s iPad and is available now on the Apple App Store.

Play with Gummibär right on your Apple iPad with the latest iOS game from Gummybear International.  The Gummibär Bubble Up Game is available in the Apple App Store now as a free download and features the one and only, lovable, singing, dancing, green gummy bear known as Gummibär!

The Gummibär Bubble Up Game is good clean fun and rated for ages 4 and up! Join Gummibär as he takes a bubble bath. Help him pop all the bubbles before they get away! See how many levels you can complete and try to beat your high scores.

The game takes its concept from Gummibär’s popular Bubble Up music video, which premiered on the Gummibär YouTube Channel about a year ago. Since then the original posting has gained almost 13 million views, with additional postings of other versions and remixes garnering millions more!

About Gummibar:
The first Gummibär videos were posted in 2006 and since then the character has grown to be immensely popular around the world. The official YouTube channel for Gummibär today has over 1.5 billion documented views and continues to average about 2 million views every day. The Gummibär YouTube channel also ranks as the 27th most viewed musician of all-time and is the 67th most viewed channel of all-time.